At first glance, She looks like a well dressed half gnoll. Opon closer inspection however you know that her movements on her legs are off, as if they were not the set of legs she was born with.A tail peeks of from under her cloak, Large and furry, much like a wolves or hyenas.Her hair is raven black, her eyes are a bright blue and betraying her chaotic nature. Her legs are covered in short black fure, the same color as her hair. Her paws end in short but sharp black claws. Underneath her cloak are a pair of Blue dragon wings, the scaled the same shade of blue as her eyes.

At a young age she lost her father in a tragic event and due to that her elven mother alienated her.Then she started out playing her mothers harp at taverns and inn,earning just enough coin for food-not long after she stole a spell scroll and found her knack for magic- from then on she travel around, Always seeming to find trouble or end up in it-She was infact Feeling from men who she was hunting for personal reasons when she snuck on the boat to Dorhal-And there, her life changed.

Aria Is known to:

She's famous for her struggle with the void. some people think she should be awarded something for it, like Charia Aria dosnt care, Or if she does, she keeps it to herself.most peole hate her, thinking she did it willingly (she was infact taken under his control, him havin her soul)

As some example of rumors maybe:

Aria in her waitress uniform. 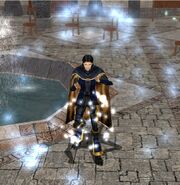 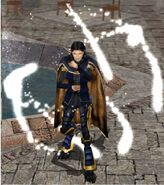 Add a photo to this gallery
Retrieved from "https://argentumregio.fandom.com/wiki/Aria_Lindon?oldid=5364"
Community content is available under CC-BY-SA unless otherwise noted.