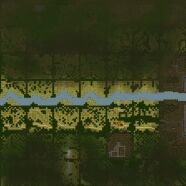 The Lord of Esrogoth was once a mercenary leader, and the former lieutenant to Fashoosh, come to be in the hire of Lord Dohral who rewarded Esrogoth with this parcel of land as payment for long and loyal service.

The land has been left largely undeveloped, save for the roadway that passes through it (connecting Tivook Province with the Eastern Citadel), a few vassals' farms, and the castle of the Lord of Esrogoth. Lord Esrogoth, after some consideration, had chosen to build a castle in the Esrogoth Province - staff it with loyal servants of many sorts and dedicate the location as a creche for his numerous children. Lord Esrogoth was renowned as a handsome and well spoken fellow who seemed ever involved in some new romance. Many suspect Esrogoth to be of some dilute elven bloodline - as longevity he has evidenced is well in excess of the human norm, and yet he appears rather youthful to this day.

Lord Esrogoth, known as a bit of a romantic cad. Lord Esrogoth, although he enjoyed the title and control of the Province - though ultimately he prized it most as a place where he could send his children to be raised well but also well away from Lord Esrogoth himself who is still reputed to be traveling the world and becoming entangled in romances wherever he goes. Elven blood and bardish charms seem to serve him well.

Esrogohold - the family manse and stronghold is located here, and crowded to the rafters with children of all ages and description, their teachers, caretakers and guards.

This roadway connects the Eastern Citadel (in the east) to the like-named roadway in Tivook Province. The roadway basically follows the river Zeethan at a discrete distance being out of eyesight but always audible from the roadway. Departing from this roadway is but one other road, that leading to the Esrogohold.

NOTE ... some few farmhouses and small farms are found near the crossroads.

All the Areas within Esrogoth Province and south of the river Zeethan not developed (rare farms) or given to the roadway that paralells the river are essentially wilderness and are grouped under this category. The only farm in the region is associated with the Esrogoth Hold.

NOTE - expeditions do occasionally boast of hunting and killing wolves in the region but the rumors persist.

With the only nearby easy crossing of the river located east of this province at the Eastern Citadel, the river itself proves to be a great barrier in this Province. Wild creatures, even monsters are found in numbers north of the river, the latter usually in 'hunting parties'. Tales of adventures in the region often are told in the nearby inns, and adventurers are encouraged to gather current lore in such places.

NOTE Strange tales come of the north lands but adventurers are urged to seek current details in local inns.

General description with some details.

Retrieved from "https://argentumregio.fandom.com/wiki/Esrogoth?oldid=5353"
Community content is available under CC-BY-SA unless otherwise noted.